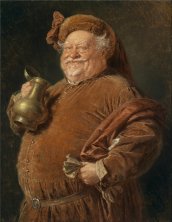 Falstaff. God save thy Grace, King Hal; my royal Hal!
Henry V. I know thee not, old man….
I have long dreamt of such a kind of man,
So surfeit-swell’d, so old, and so profane;
But being awak’d, I do despise my dream.
…
Presume not that I am the thing I was,
For God doth know, so shall the world perceive,
That I have turn’d away my former self;
So will I those that kept me company.
…
Till then I banish thee, on pain of death,
As I have done the rest of my misleaders,
Not to come near our person by ten mile.
…

As soon as trouble-making Prince Hal was crowned as young King Henry V, he coldly spurned Sir John Falstaff, his longtime compatriot, and banished the old fat knight, who expected instead a comfortable patronage position. Jolly, wicked Falstaff, witty alter-ego to the young prince sowing his wild oats, was cast away.

Watching this cruel scene the other night, I recalled seeing the play in my youth. Back then, I identified with the boisterous prince. Now, I understood the new King. I realized that in my youth, I too had my own internal Falstaff, but then gradually banished the counter-cultural “misleader” in my early 20s as I tried to become a strong young man, much like Prince Hal when he awakened from his youthful dreams to become king. Many of my friends went through a similar process. Shakespeare, meet Freud.

I read a couple of years ago that Bruce Springsteen said our lives begin like a kid in a car, and as we age, new versions of us climb in and take the wheel, but our younger selves never get out, and we drive down the road all together, more and more crowded, trying to get along with each other (and not kick each other out). It’s quite a road trip in that life-mobile. Sigmund, meet Bruce.

Born as sucking infants, we explore our bodies and the world we inhabit, with our mouths, then fingers, and all our sensations, until our consciousness emerges. I cannot remember the mind of my baby self. No one can. What crazy chaos reigns for those first few years? Most people remember nothing before four or six years old and maybe that’s for the best.

I remember my 5th birthday, with my parents and Nana, at Rochester’s Monroe County Airport. There were airplanes outside the picture windows, and sparklers in the cake. Later that summer my family went to Europe for a year and I remember astonishing amounts of detail, where we lived in England and Spain, our car, our conversations, museums and festivals.

Ages 6-12 I lived a straightforward American middle class childhood, although because it was the 1960s and my parents were both academics, I had a fair exposure to literature and art, folk music, and early hippie culture. I looked up to Pete Seeger and Woody Guthrie. When my family went to a 1970 performance of Hair, the antiwar and druggy messages were unremarkable to me as a 12-year-old, compared to the surprise of onstage nudity!

In 8th grade, I was a year young, having skipped 6th grade. Some of my precocious friends decided to get cigarette papers and roll mint tea cigarettes from tea bags. I joined them after school one day, and remember the burning feeling of the smoke, combined with the cooling effect of menthol. Smoking cigarettes was still cool back then, but we knew we were misbehaving.

During high school, I lived my wild oats years lagging behind most of my circle of friends in malfeasance. But I confess I made some bad choices along the way – after all this was the age and era of the counter-culture, of antiwar demonstrations, of sex and drugs and rock and roll. We were wild and rebelled against the system. Falstaff was among us; we were Falstaffian. Sorry, I’m not going into detail. Trespassing is one troublesome activity I will admit to. A few of my friends would scout out water towers and construction sites which we would enter and climb. We did not vandalize, or do damage. Our urge was more curiosity, freedom, and adventure than mischief.

Those were simpler times. I did my school work, worked my jobs, and graduated among the top kids in my class, and was admitted to Princeton. I was a young prince. I was doing more right than wrong, and I survived high school without causing harm to others, or lasting harm to myself. But I lacked direction or focus to match my curiosity about nature and suspicion about society.

In college, my poor study habits caught up with me. Late nights bullshitting with roommates, sometimes drinking, distracted, I missed morning classes and although I did all the work, I did less than many, with less intensity, and became used to missing the A’s I had been accustomed to. My psychic Falstaff had some fun, but I was not very happy, now that I think about it. I was repressed emotionally and immature. There were 2.5 males for each female and my few serious relationships were troubled. At graduation I learned that out of 41 seniors in my biochemical sciences department, I was the only one who didn’t apply to medical school. I recall watching a young janitor polishing the floor at the new mall, and realizing that if I didn’t find some higher purpose in my life, that might be my job, too.

Instead I found myself a doctoral research position with Ilan Deak, a rising young professor in Zurich, continuing with fruit fly research I did for my senior thesis. I had a blast in Switzerland while it lasted. Officially I had a half stipend, meaning in my calculation I owed the lab 22 hours a week. (Full time for hard-working Swiss was 44 hours.) I worked more than that, but I had plenty of time for beer halls, socializing, traveling the Alps, to Italy, Yugoslavia, and playing up being the cool American – spinning records as a DJ at the International Students Club, picking up girls, and being picked up. I felt like a young prince again, on the town.

About one year in, my professor died after ingesting a neurotoxin we had in the lab. The insurance company kindly called it an accident but we all knew it was suicide. Later I understood he had major depression, but back then it was incomprehensible to me, traumatic. A life with such great potential, cut short. I had to grow up fast and make some adult decisions. I decided to stay, for a while, and was taken in by another lab, under another professor. That lasted two years.

Meanwhile, I was gradually absorbing some of the famous Swiss work ethic. They were punctual, organized, and methodical, and used their time effectively – whether at work or play. I took up viola again, after a hiatus through college. I learned German, then Swiss German, taught English, and weighed my options. Marine biology? Enology? More and more, I searched for a path, and looked less and less for Falstaff and his gang.

The election of right-wing Ronald Reagan in 1980 shocked my liberal conscience and led me back to the US. My political interests, facility at learning languages, love of discussion and debate about science and everything else, and a recognition of my blind side in writing and history, all combined in the decision to apply to law school. And so I arranged to complete my Master’s degree, and returned, the wrong way, via Moscow and the Trans-Siberian Express, to Tokyo, a full moon climb of Mt. Fuji, and back to Boston University for law school in 1981.

Law school was serious work, and by that time, like Prince Hal/King Henry, I had effectively banished Falstaff. The role of a lawyer, the responsibilities, I took them seriously. I had developed focus, intensity, drive. Of course, being a young man in New York in the mid1990s, I had plenty of fun. But I worked hard, rose in my profession, and maintained my first long-term relationship, followed by meeting my lovely wife, with whom I’ve been for 28 years – half my life. I settled in to my career path, and sought to balance paid work, public service, play, and raising my three wonderful children.

So, could Falstaff ever truly be banished? No. Shakespeare had King Henry promise a healthy stipend to the free-wheeling knight, and later, he revived Falstaff, the character, reputedly at Queen Elizabeth’s request, in The Merry Wives of Windsor. Falstaff remains one of the most popular characters in drama, and his type permeates modern entertainment (think The Hangover movies).

Likewise, my psychic Falstaff did not remain banished, just muzzled and speaking more modestly. I found a profession, patent law, where my favorite clients are inventors, innovators, restless iconoclasts pushing hard to reshape the world, rather than just trying to fit in. These people have a lot of the young prince in them, and, I guess, a touch off Falstaff. Me too, it seems, and together we have accomplished a lot of good over the years.

Even as I play the role of strict father and upright citizen, from time to time, the playful, rebellious side of me will surface — for amusement, or to cope with life’s absurdity and trouble by cunning ploys. I try to use my past to teach cautionary tales to my children, about taking calculated risks and learning from my mistakes. And of course I still get into trouble – just not too often.

Coming back to Springsteen’s life-as-roadtrip metaphor:

Now, the most recent me (the one with the unfortunate progressive illness) has taken the wheel of my life-mobile, and I’m looking around at all the younger (and healthier) me’s riding along. I’m teaching myself lessons about how to enjoy this phase. I enjoy tweaking people if they get too serious. I rely on my wits to rebel against the unpleasantness that confronts me, and I see that being sick offers new freedoms from social expectations – a chance to act out, a bit like Falstaff.

Not that this is good compensation for losing my hard-won independence bit by bit. But I do find widening circles of people who are happy to help, and to join with me as I find new ways to play the game of life.

Sure, life is not all fun and pranks, and growing up means somehow banishing Falstaff from our regular circle. But I’m glad he’s still around, not too far away, when we need him.