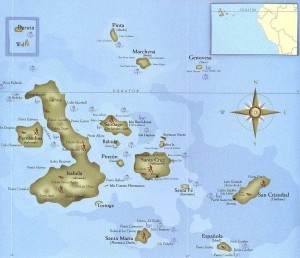 Ruin and death rule the Galapagos.
Animal vegetable land surf and sky.
Life begets life as everything flows.
More will come, and all will die.

The Bishop’s ship drifted here
bound for Peru half a millennium ago.
Becalmed, dying of thirst, rowing away,
he reported to the Spanish King:
Abrupt, desolate, mysterious rocks
“as if God had rained stones.”
Raining stones is poetry.

At the beginning of time,
from void, star dust formed.
A molten ball then cooled and crusted.
Turbulent magma punched —
Punches —
holes to reach the sky,
volcanoes blast the earth’s inside out
hurling ash and lava,
gas and scoria, gargantuan amounts,
forming craggy masses above the sea,
not born, they explode,
cosmic stuff,
free of life and death.

But only for a moment.
Washed in restless currents of sea and wind,
the isles are immediately assaulted
in a slow concerted biological invasion,
begun a short five thousand millennia ago,
continuing today and on,
forever?

500 miles away, the continent swarms
with every phylum and order of life, survivors.
Reefs of fish swim here to feed and shelter
among the tumbled rocks,
Sea lions climb out to rest and mate.
Sea birds fly and find the fish,
with stowaway seeds concealed in their feathers.

In the sky, a solid mist of aerodynamic seeds
wafts for days above the humid ocean,
then, wet with Garuá mist, rains on cool volcanic rock.

Most cannot grow. But one succeeds,
in moistened ash.
A plant appears, then more.
Moss, lichen, cactus, and shrub,
vegetable colonists.

Insects, too, hitch rides and die,
but one and more find how to live in the new land.

Andes snow melts and runs down to the coast as rivers,
with logs and rafts of twigs stuck together,
floating out to sea.
The current, slow and steady,
delivers the load to Galapagos in weeks.
Few, but some, reptiles and insects survive
and join the colony.
An iguana here and there,
a tortoise but no hare.

What strange profusions these creatures seem.
and different on each volcanic isle.
Forced to fit this harsh mold,
by death’s inevitable
curse and blessing,
natural selection:
Those that fit breed more,
the rest breed less
and vanish from these shores.
And so pass millions of years.
Optimal not perfect.

Why do they come?
Restless and alive,
living, dying or dead
or simply doing their job,
feeding the predator and scavenger.
Reaching day’s end for one,
enabling another day for the other.
It’s all about dinner.

Why do they come?
Chance, bad luck,
instinct, survival.

No melting pot for immigrant survivors,
this hardened lava and ash.
Species diverge and become unique
until each island flaunts
its own finch and lava lizard,
marine iguana and tortoise.

Death and ruin in Galapagos,
for some it’s yes, for others no,
creation and rebirth,
easy come and easy go.

The Baroness kept her lovers guessing,
As neighbors died in mystery, secret.
A deep lava tube dark and wet.
Above, rusty ruins of a fish canning experiment, failed
And a barrel for a post office –
put in your cards and take out those
for where you’re going.
It’s still in use.

Black marine iguanas, mottled red
in ghastly cuddle puddles
by the score, but there lies one alone,
a sort of peace, bloated,
with eyes and tongue plucked out by a hawk.
Another one lies on the rocky beach,
eviscerated by a male hawk bringing food to its babies,
mortal Prometheus,
punished for bringing this
species here.

A sea lion mummy rests on the rocky shore
not forever. Something or someone will scatter the
skull and bundle of white ribs and vertebrae wrapped in sea lion leather
open on the side for a view into the private life and death of that pup.
Brown piles of lingering mothers nursing pups
and barking while males lumber over the lava rocks,
polishing them on the way to the sea. 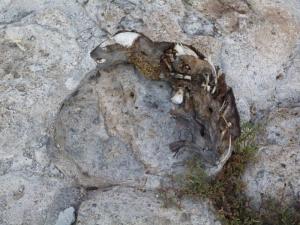 Female boobies are bigger than male boobies
but male beachmaster sea lions are bigger and tougher
than their mates, who carry a series of fertilized eggs in their wombs,
in case the males don’t find them.
The pups playing on the volcanic beach try to be like them.

Darwin came with FitzRoy’s Beagle,
In 1835.
He saw the variation and had a hunch
that natural selection could explain it all.
But he was busy chronicling barnacles and coral islands,
while Wallace wrote of evolution.
(I saw plant specimens Darwin collected.)
Then Darwin made his case
that fixed creation makes no sense.
Creation continues, today, right now.
Reproduction, variation, struggle for life,
natural selection, migration, isolation —
Life brings change,
change brings death and extinction
and new life.

Darwin expected a fight
from those who believe what they’re told,
he was right about that,
now the argument’s old.

Melville wrote of Las Encantadas in 1854,
the enchanted isles, bizarre even to him.
Sailors came from time to time,
some found water and wood.
Most exclaimed and left in disgust
at the inhospitable terrain.
They hoisted giant tortoises onto their ships,
livestock for later slaughter
200,000 over the centuries.

Settlers came again and more,
but most could not survive.
They died, or being crafty,
hitched a ride away again.

Convict, fisher, farmer, explorer —
To strangers’ eyes the sprawling land
might seem a paradise from afar.
But not when landed on the ashy shore.

The beginning of life
was in the Galapagos for many species.
Man, not so much.
Vonnegut had humans evolve into sea lions here
after the end of the world in war.
A fitting place to make a last stand.

People think it lacks creature comforts.
But there are comforts for the creatures.

25,000 Ecuadorans live on Santa Cruz.
At the fish market the sea lions and pelicans
enjoy the guts thrown their way. 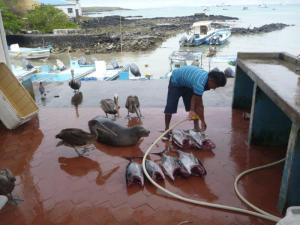 We live for seven days on a boat
that moves from island to island,
burning 250 gallons of diesel a day.
We refuel near the US Air Force base on Baltra,
as hundreds of boobies weave their way miles
around the harbor, plunging to seize the schooling fish.

We fortunate few come to see the famous place.
we are visitors,
pilgrims,
but our captain said
“Make this boat your home this week.”
Why do we come? Curiosity, homage, adventure
by air, by sea but not by land.
I spotted over 50 species.

Why do we stay anywhere? Because we live.
We eat, play, nest, mate, rear young, explore. Survive.

Rome wasn’t built in a day
and neither was I.
The Galapagos wasn’t built in a week,
even a busy one.
But life begins anew each day
and ends again each night
until it doesn’t.
And so it goes for us all.
Rome was sacked
but took a long time to fall.
And it is still Rome,
the beautiful city of seven hills.

It’s all about dinner, said my friend,
all around the world.
Heinlein’s Stranger fed himself to his friends.
Al Capp’s Shmoos cooked themselves
to serve us a meal.
We raise animals and grains to feed ourselves.
We make the world our home.

Dillard wrote lyrically how soft life
and hard rocks shape each other in these islands.
So she understood the world:
“Everywhere freedom twines its way
around necessity.” 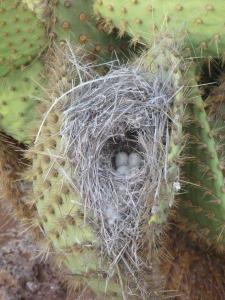 Life brings change,
change brings death and new life.
We live we die
we leave our paths behind
and others walk beyond.

It all makes sense
if you dare
to go look at it all
and care.